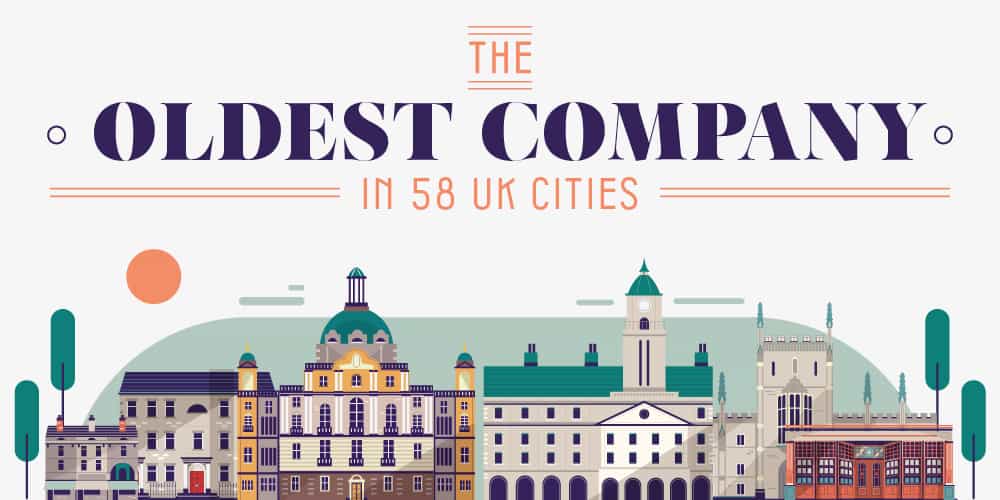 Sadly, government figures suggest less than half of the UK’s 726,000 new businesses will survive their first four years. Around 25-30% won’t even make it to their second anniversary – and that’s not even accounting for the post-pandemic economy.

So, what does it take to create a keeper? Like a ‘this business should have a plaque outside’ kind of keeper? Following our guide to the oldest businesses around the world, we here at BusinessFinancing.co.uk put on our researcher caps to find the longest-running, continually operating businesses in 58 UK cities: a roll-call of history’s winners, who started with a bold vision centuries ago – and are still making it work today.

A Harbour That Survived Vikings, Pirates, and Nazis Is UK’s Oldest Businesses

Here’s a roadmap illustrating the birth of the UK’s oldest companies, city by city – from Aberdeen Harbour Board (1136) through the centuries to The Tudor of Lichfield (1935). Curiously, ‘media’ companies such as printers, publishers, newspapers, and booksellers dominated early on and are still going today, despite unimaginable developments in tech and media culture.

Manufacturers and retailers have also survived across the centuries, while the ‘old’ real estate businesses on our timeline are young in comparison.

Aberdeen Harbour Board is the grand dame of British business. King David I of Scotland established the harbour nearly 900 years ago. Early challenges faced by the young company include Viking raids and piracy, and later the harbour rebounded from Luftwaffe bombings during World War II.

All the while, the business evolved and expanded in symbiosis with the needs and strengths of the city around it. Even today, after half a century of rapid modernization, Aberdeen Harbour is on the brink of further expansion into Nigg Bay.

The oldest industries in several regions adhere to received ideas about their area. Manufacturing accounts for the oldest businesses in the West Midlands and Yorkshire and the Humber, although both companies (in Birmingham, 1655, and Sheffield, 1760) predate the industrial revolution.

Printing and publishing dominate southern cities and Cambridge in the East of England, where the Cambridge University Press was chartered by Henry VIII in 1534. Today, the company has become the oldest and second-largest university press in the world despite ‘passing’ on the book that would become the Oxford English Dictionary.

When businessman Paul Hurst stepped in to rescue Bennett’s Department Store from administration in 2019, it seemed like a rare example of a shop being saved from the failing high street. But Bennetts was different: it was the oldest company in England’s East Midlands and the oldest department store in the world.

Originally named Weatherhead Walters & Son, the shop opened as an ironmonger in 1734, developing ‘departments’ such as Gun & Silver Smiths and Oil & Colour Merchants during the early years. But it took Hurst’s intervention to finally move the show online, where Bennetts continues to operate until its Cathedral Quarters premises can be restored.

Four of the 10 UK cities with the longest-running businesses are towards the south of the main island; three are across England’s belt strap, one in Lancashire, and two along the east coast of Scotland.

Media companies account for half of the top 10, while the two oldest companies in the UK both have a maritime theme: the Aberdeen Harbour Board, discussed above, and London’s Trinity House.

London’s oldest business (and the second oldest in the UK) is “a charity dedicated to safeguarding shipping and seafarers.” The ever-growing responsibilities of Trinity House include marking and – if needed – removing wrecks from the waters of England, Wales, the Channel Islands, and Gibraltar. But when the charity was incorporated in 1514, its purpose was simply to “regulate pilotage on the River Thames and provide for aged mariners.”

From companies who created their own niche to businesses that moved where the money was, the story of the UK’s oldest businesses is one of imagination and adaptation.

They’ve survived war, pandemics, and even the internet. But which is the oldest business in your nearest city? Check out our full data in the interactive table below to find out.

We used sources such as Companies House, city location guides, local authorities, historical societies, and chambers of commerce to find the oldest companies in each city. In cases where a business was bought out, we included said business if there was a reasonable degree of continuity. For merged businesses, we used the date of the oldest business.

Any data which lacked a reasonable degree of certainty was excluded from the final article. If you believe that your city has an older business, we’d love to hear from you.

Bath Building Society. (2021). We’re different because you are. bathbuildingsociety.co.uk

Bennetts of Derby. (2021). THE HISTORY OF BENNETTS THE WORLD’S OLDEST DEPARTMENT STORE. bennettsofderby.co.uk

Cambridge University Press and Assessment. (2021). Building on our heritage and ethos of excellence. cambridge.org

D. Cag. (2020). 45 of Britain’s Oldest Companies, From Rolls-Royce to Burberry, Still in Business After 100-Years. richtopia.com