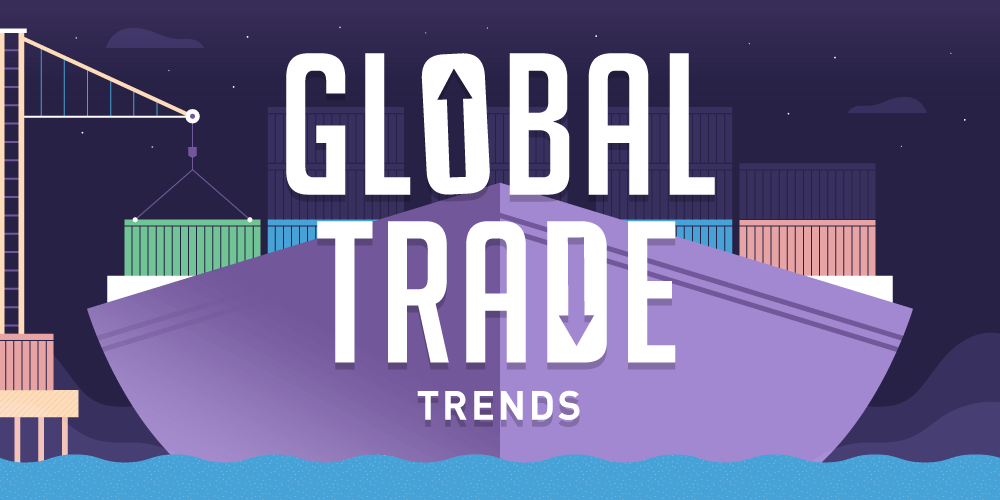 Ports quietened and shelves emptied as nations shut up shop. By July 2021, Britain’s exports to the EU alone were £1.7bn lower than July 2018.

But business is back. Three-quarters of executives say their companies are now more resilient than before the pandemic. “Exports of many countries are growing at double digit rates,” according to the United Nations Conference on Trade and Development.

The UK’s bounce back will be tougher. The chairman of the Office for Budget Responsibility calculates that the pandemic will reduce GDP by 2% in the long run – along with a larger 4% reduction due to Brexit. “A profound economic adjustment looms,” says Citigroup economist Benjamin Nabarro. “Many firms now seem to be expecting and preparing for a different economy in the years ahead.”

In a moment of reinvention, it is fruitful to consider your strengths. So, BusinessFinancing.co.uk used the CEPII – BACI: International Trade Database to uncover every country’s leading import and export in 2019, right before the pandemic.

Gold and Black Gold Among Countries’ Most Common Imports

First, a look at global imports. This map charts the top import in every country, while the ring chart below illustrates how commonly each product features as a country’s top import. 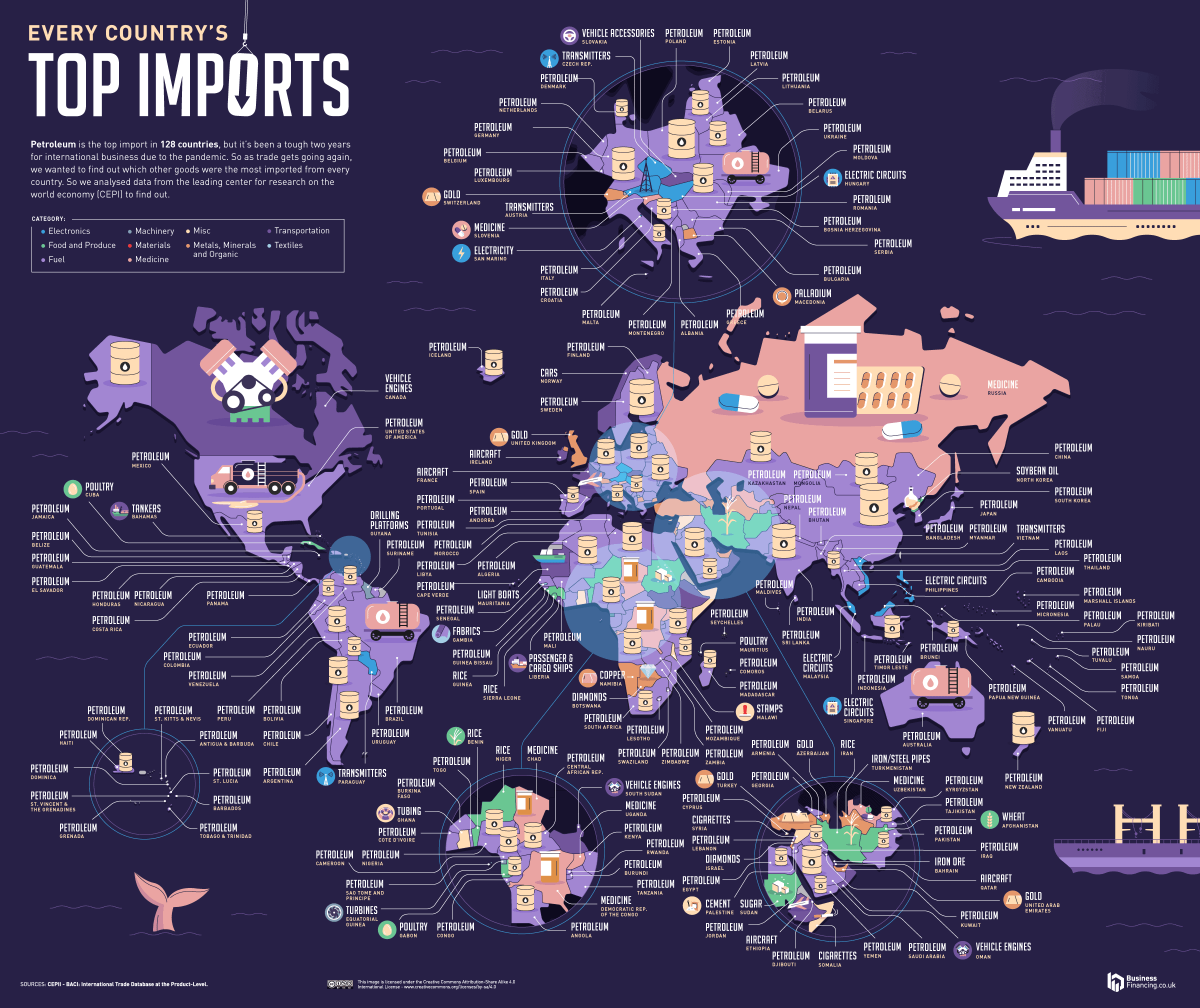 Africa has the most diverse range of top imports, from aircraft, cigarettes, and diamonds to stamps, tubing, and vehicle engines. Gold is the top import in five countries, including the UK and Switzerland. The UK is what’s known as a “terminal hub” for gold, meaning the trade in gold is significant despite not mining very much on homeland. The nominal trade in gold is so significant that it skews the government’s overall trade figures, making them look healthier than they are. 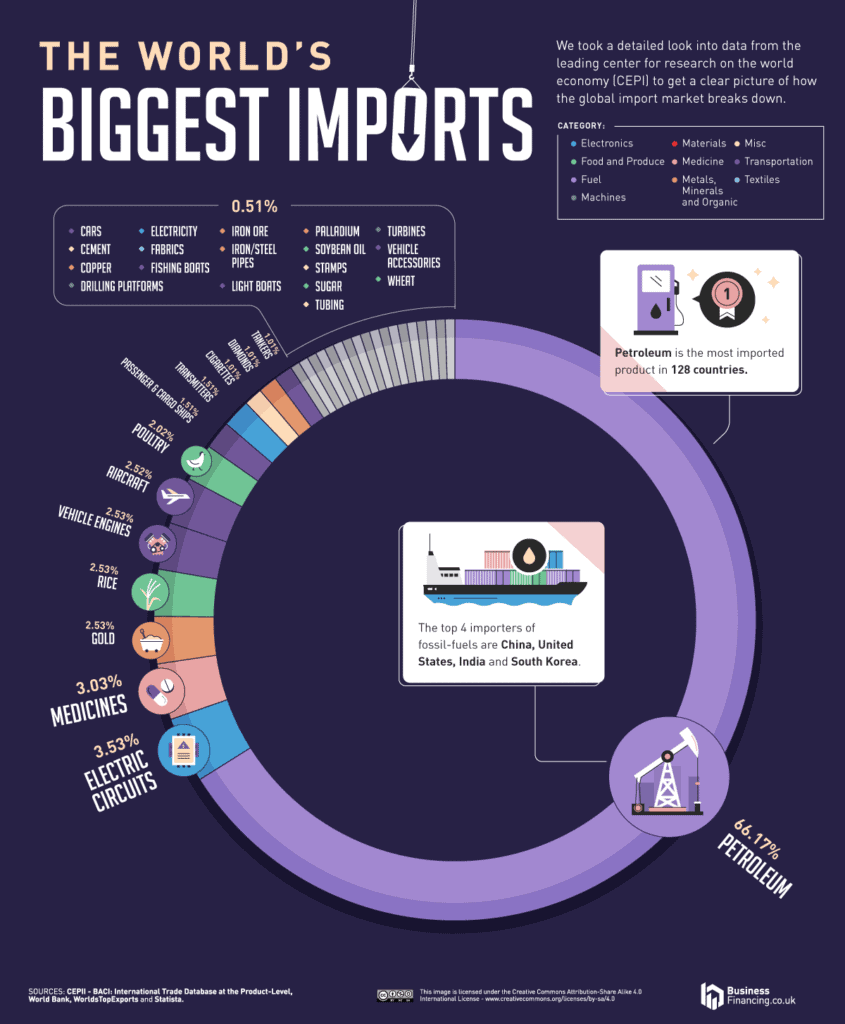 A brief upside to the pandemic was that everyone switched off their engines and stopped using their cars so much. However, since petroleum is the most common ‘top import’ around the world (128 countries), the impact on the economy has been significant. The United States imported 7.86 million barrels per day in 2020 – the lowest figure since 1991.

Next, we did the same with exports. Here is a look at the worldwide export superstars and a breakdown of the split in products. And scroll on for a detailed look at the top exports continent by continent. 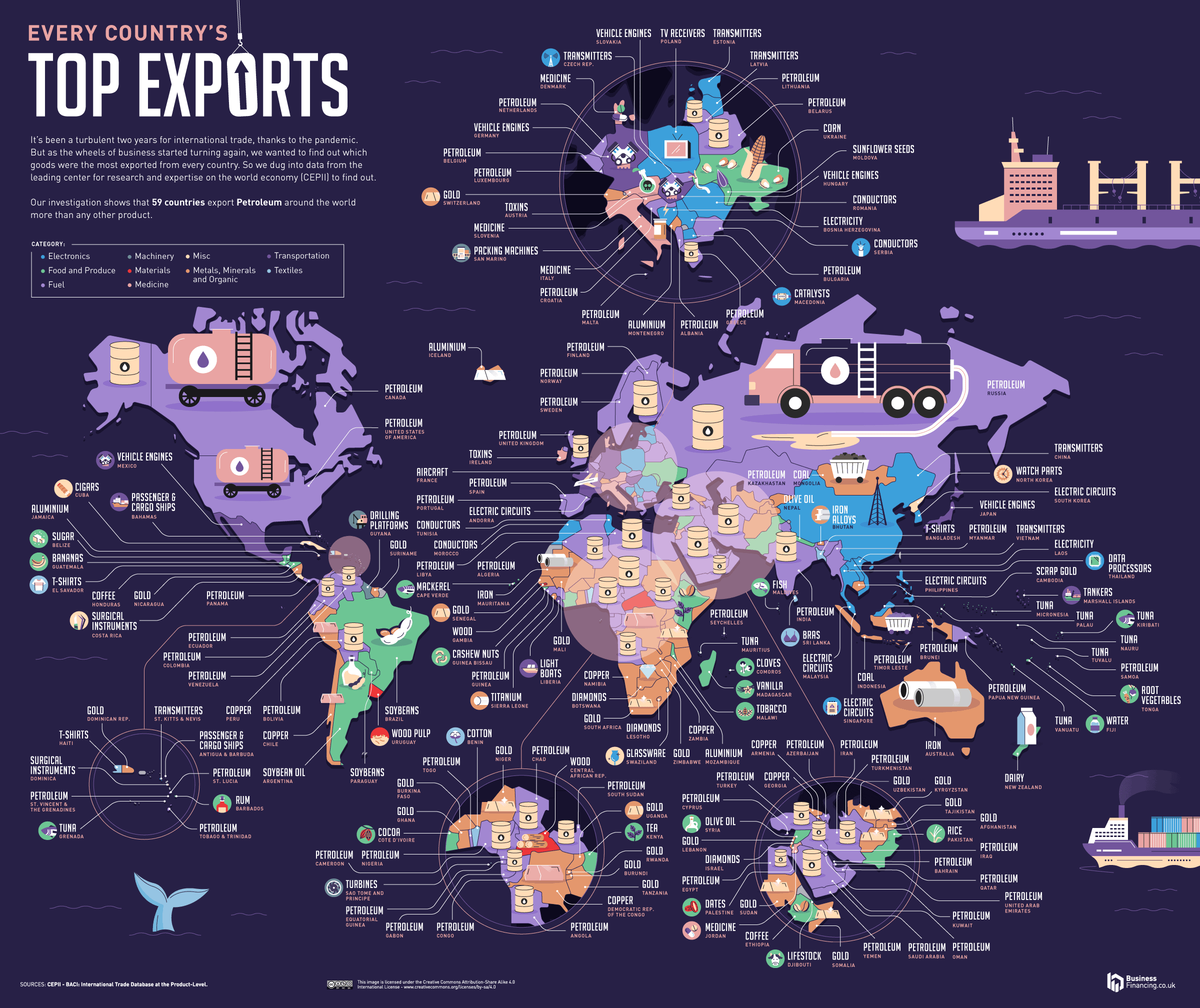 Exports are where we start to see regional specialities really come into play. For instance, nearly every country with gold as its top export is in Africa or the Middle East. And the islands of Oceania share tuna as their most in-demand local product. Petroleum makes up just over 25% of the UK’s fuel imports, but the UK usually exports more than it imports – having refined it on the way through. 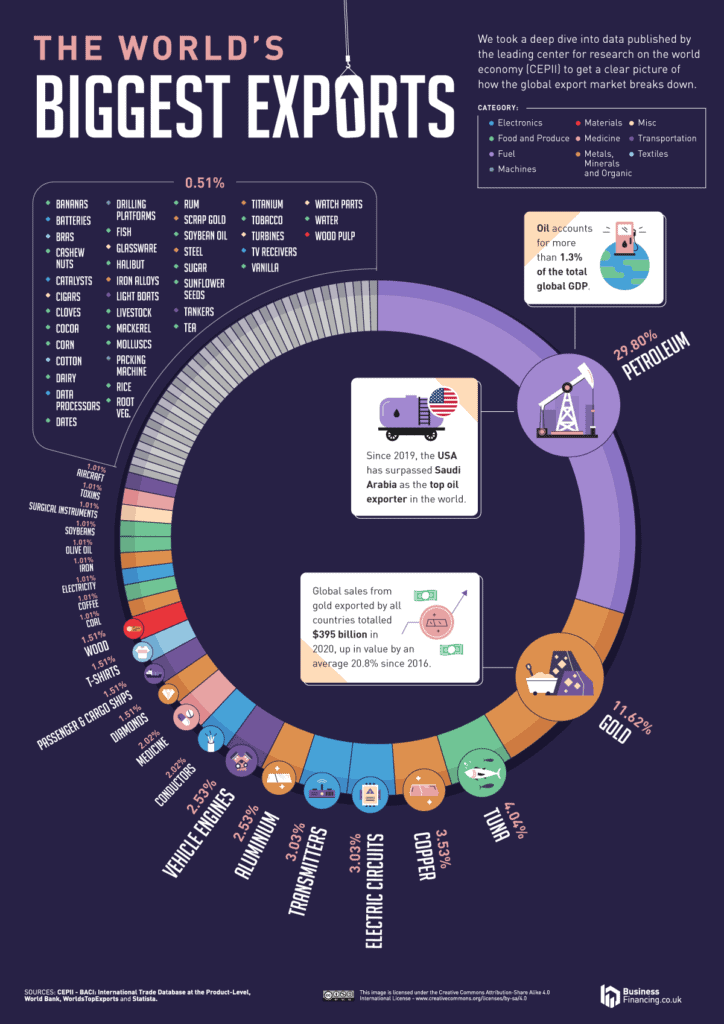 Petroleum is the most common export: it is the top seller in 59 countries. Gold and tuna step up into second and third place, positions occupied by electric circuits and medicine for imports. Tuna is worth a lot more when processed, as evidenced by a plan to boost tuna exports from Barbados by nearly 2,500%. (The current top export from Barbados? Rum!)

Petroleum is the most common top export from North American countries, featuring for around a quarter of those listed (six out of 23). There are several ‘runner-up’ exports that feature in two countries each, including oddities such as surgical instruments (Costa Rica and Dominica) and T-shirts (El Salvador and Haiti). 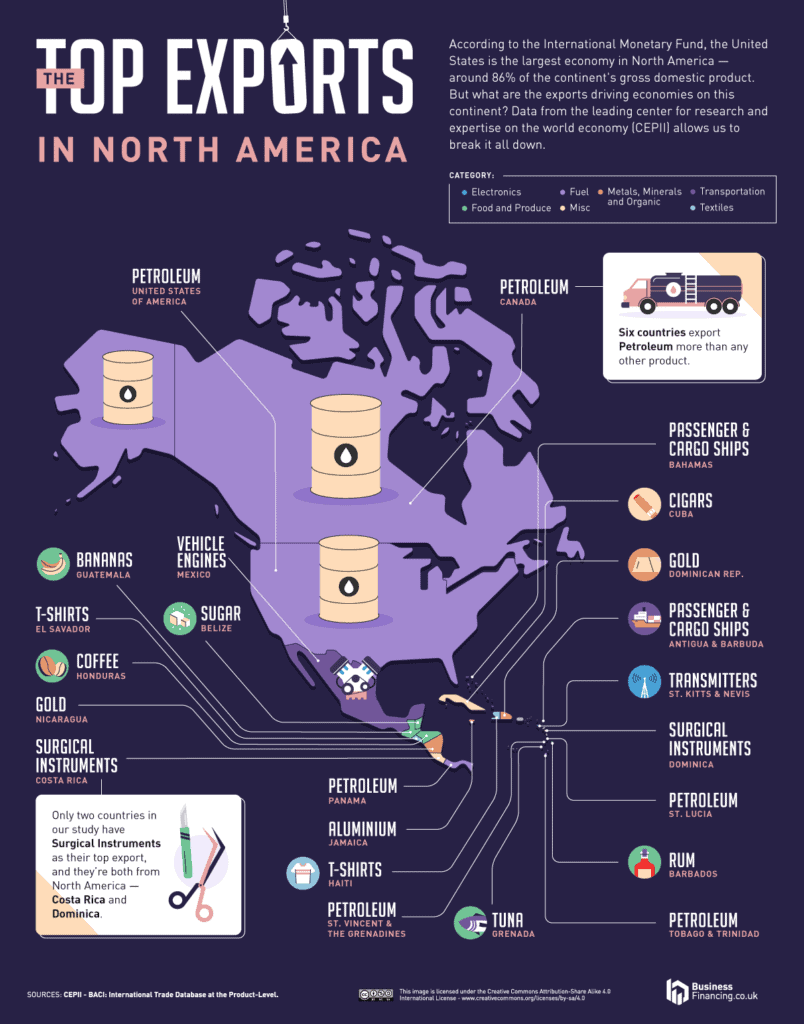 The United States and Canada are among those with petroleum as their top export. However, the US is currently considering a ban on crude oil exports to counter the surge in fuel prices.

Four South American countries have petroleum as their top export. Copper (Chile, Peru) and soybeans (Brazil, Paraguay) are the second most common – with Argentina compounding the soybean economy with its soybean oil exports. 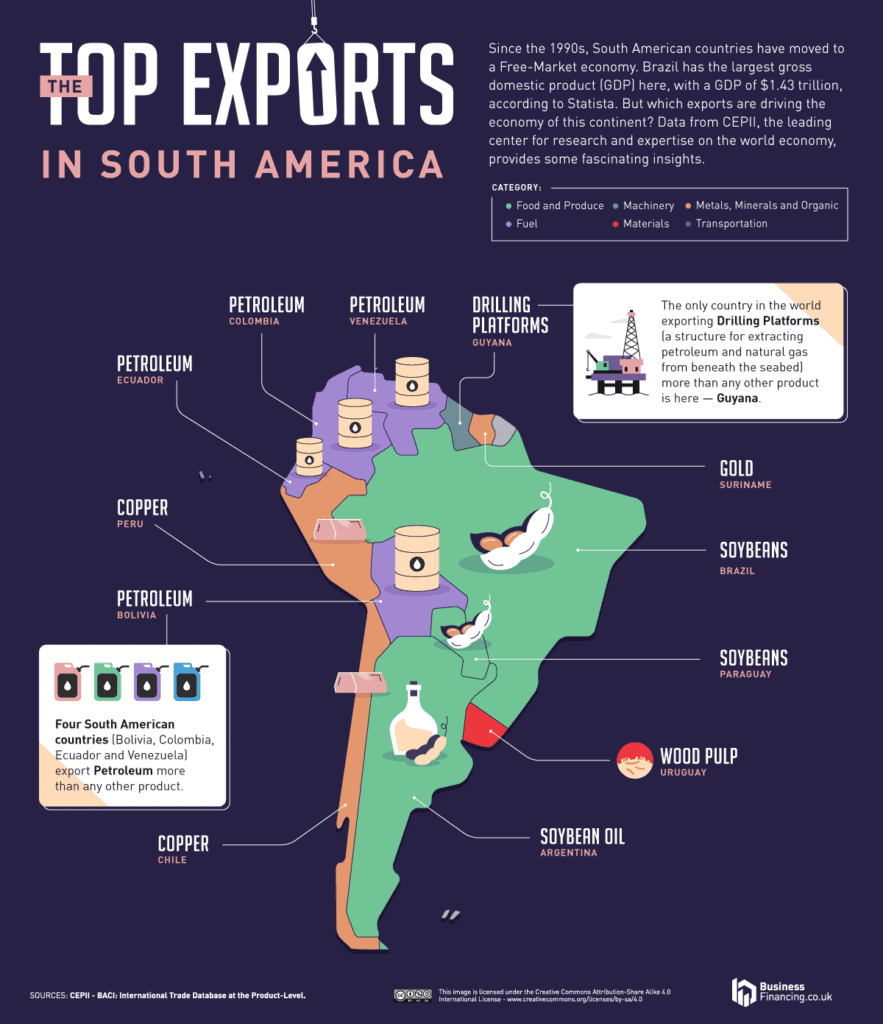 Uruguay’s abundance of pine trees fuels its wood pulp exports. The export of pulp from South America to Europe is a significant market in general – despite fears of the environmental strain of harvesting fast-growing trees in the rainforest.

Two-fifths (39.5%) of European countries count petroleum as their top export (17 out of 43 countries). Medicine, transmitters, and vehicle engines are the top exports for three countries each. Switzerland is the only European country with gold for its top export. 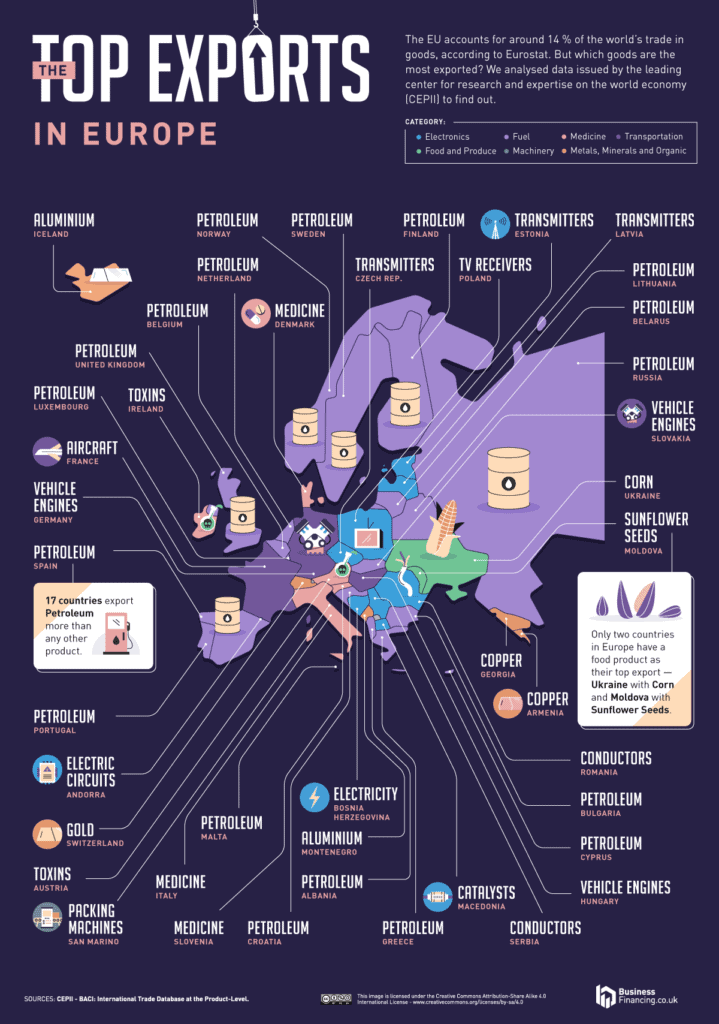 Decarbonization targets will likely change this landscape over the next two to three decades. But there will be knock-on consequences for other exports. For example, Germany now imports most of its fossil fuels, such as petroleum, having exhausted much of its own domestic resources. Germany’s current top export is vehicle engines – an industry that is itself in flux during the transition to electric.

Remove the petroleum from this region’s exports, and you get a charming shopping list: dates, diamonds, fish, gold, medicine, and olive oil. However, the Middle East’s wealth of natural resources means that petroleum remains the top export in 13 of the 23 countries in this region. 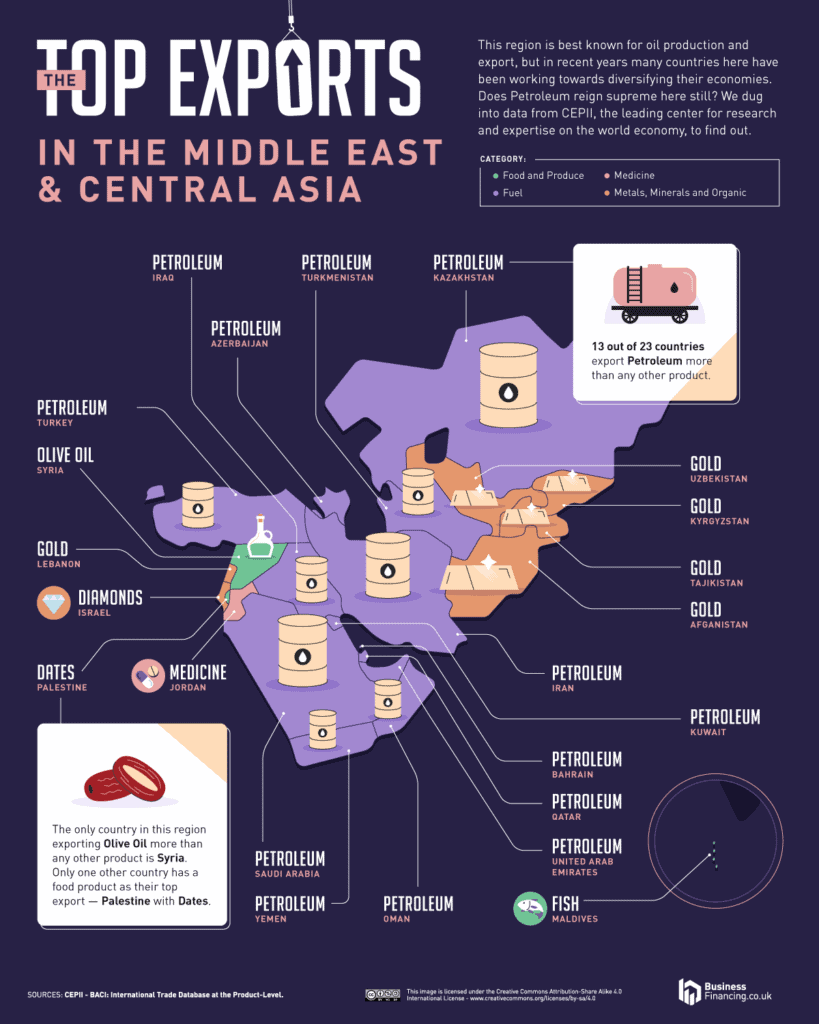 Dates and diamonds are the top exports from Palestine and Israel, respectively. If you’re boycotting Israeli diamonds right now, then take comfort that dates are more delicious anyway. Plus, they contain lots of calcium, vitamin K, and magnesium and may reduce colon cancer risk.

Petroleum ties with tuna in this region, topping exports in six countries each. The petroleum nations are concentrated in Asia, while the tuna nations are in Oceania. Four Asian countries boast electric circuits for their top export. 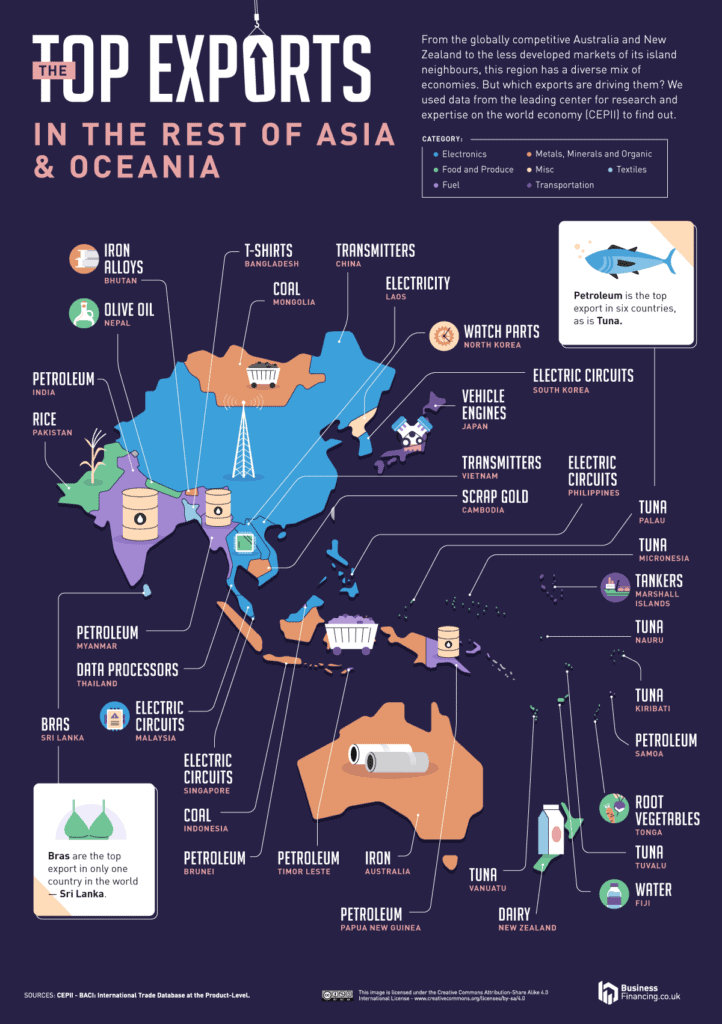 Sri Lanka plays a major supporting role in the region: it is the only country in the world where the top export is the bra. The South Asian country is looking to the long term with its booming garment trade by doubling down on environmental sustainability and ethical working practices. 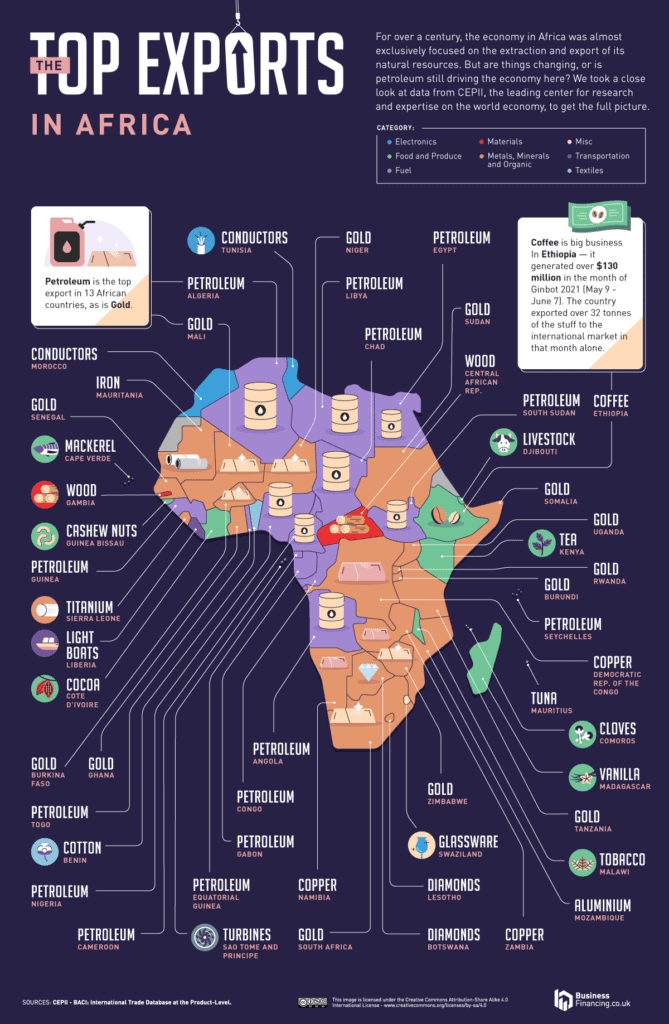 Africa has the most diamonds in the world, and Congo alone has natural resources worth trillions of dollars. So why – when oil, gold, and diamonds are such major exports – is Africa perceived as an emerging continent? While the answer is complex, it can be boiled down to corrupt leadership at home and neo-colonialism from abroad. As a businessperson, the choice of who and where your supply chain begins has ramifications far beyond your home market.

The People-Power Behind Import/Export

As the global economy struggles back to its feet, it is essential to remember that imports/exports are not the only part of the market to take a bashing. The workforce, too, has suffered, and it is people – workers and consumers – who will fuel the recovery, who the new economy must serve.

To find out more about the top export from every country, please sort through our data in the interactive table below.

Our data scientist pulled import/export data for every country from the following source: CEPII – BACI: International Trade Database at the Product-Level. Then he isolated the top imports and exports in 2019 by country.