Schoolkids, businesspeople, and politicians alike are praised for their knowledge of a vast number of words. But are there any benefits to a big vocabulary besides sounding like you swallowed a dictionary?

Yes, affirmative, absolutely. Words are fundamental to how we think, know, and communicate. A strong vocabulary makes your business conversation and speeches precise and impactful. And using varied language adds depth to your expression. After all, if a leader applies the word “robust” to an exam system, anti-Covid measures, their response to an attempted assassination, and their relationship with Donald Trump, “robust” starts to become meaningless.

BusinessFinancing.co.uk wondered which leaders most ardently love embiggening their wordage. We took a 10,000-word sample from the speeches of 50 business leaders and counted the number of unique words in each sample. For example, Apple boss Tim Cook has the second-largest vocab in our study – in a speech of 10,000 words, he would use around 2,209 different ones. Mark Zuckerberg is 4th from the bottom, with a unique word count of 1,457.

We analysed each word sample for emotional emphasis (number of positive and negative words), too. Then we did the same for President Trump and President-elect Joe Biden, just to see how they measure up. Scroll on to study, peruse, and inspect the visualizations of our findings.

Murdoch’s Vocabulary Is 50% Larger Than Zuckerberg’s

Smaller vocabularies to the left, larger to the right. Use the buttons on the top-right to filter the results and hover over a face for more details.

Perhaps it should be no surprise that newspaperman/media mogul Rupert Murdoch is the business leader with the broadest vocabulary. His father was a correspondent and newspaper magnate, and Rupert studied Philosophy, Politics, and Economics at Oxford.

We get our news through headlines and social media more than in-depth stories in newspapers these days. Accordingly, new media mogul Mark Zuckerberg uses a vocabulary of just 1,457 per 10,000 words – two-thirds of Murdoch. Twitter’s Jack Dorsey is one position above Zuck, using 1,461 unique words in every 10,000 – although Twitter is a veritable engine room for the generation of brand-new words.

The Four Most Positive Business Leaders Are Women

One in every three words Lynne Doughtie says is positive – against just one in five for Warren Buffet and Jack Dorsey. KPMG former boss Doughtie has one of the smallest vocabularies in our study (she’s #46 with 1,484/10,000) but believes in the power of positive thought and speech: “Talking about high-character employees, celebrating them, using examples are all good ways to encourage the behaviour that you are looking for,” she tells Forbes magazine.

Our guest politicians, Trump and Biden, came out on top for negative word-use. Beyond healthy political criticism, the 2020 campaign was blighted by the use of insults. Mike Bloomberg is the business leader with the highest percentage of negative words (14.85%). But Bloomberg uses emotive language in general: with 40% of Bloomberg’s vocab tagged positive or negative, only Trump emotes more. Bill Gates and Warren Buffett both have relatively high negative counts compared to the number of positive words they use.

An ‘Unpresidented’ Showdown: Analysis of Trump and Biden’s Campaign Vocabularies

America’s 2020 election campaigns cost candidates $14bn – twice the price of 2016. But the escalation of emotive – and sometimes misleading – rhetoric has come at a cost to the trust Americans have in their politicians. 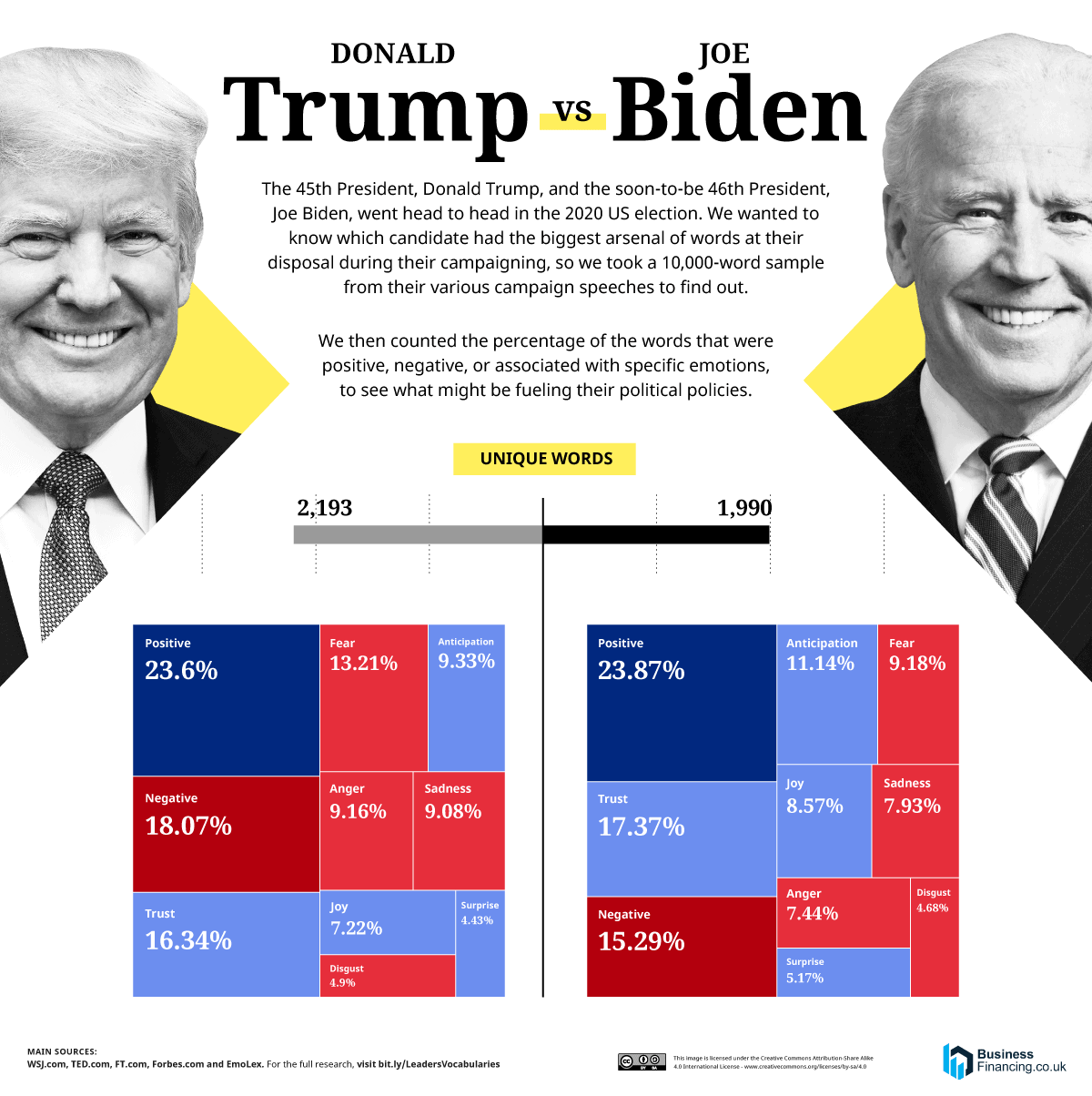 While Donald Trump’s speaking style is famously idiosyncratic, there is little difference between the emotional firepower in his choice of words, compared to Biden’s. They used almost exactly the same percentage of positive words. Although Trump out-negatived Biden by nearly 3%, they were both more negative than anybody else we studied for this project.

That 3% accounts for the difference between Biden’s total vocabulary (1,990/10,000) and Trump’s (2,193). But Trump also has the advantage of a freeness with his use of language. He is renowned for “syntactic flubs, stuffed with semantic mistakes” – in other words, he may use a lot of different words but doesn’t always use them correctly. It’s a semi-intentional style that allows him to “to speak vaguely, equivocate, insinuate, inflame, and intimidate,” according to the chairman of Yale University’s English Department.

Of course, the easiest way to boost your vocabulary is to simply make words up. Trump is famous for dodgy neologisms, from ‘unpresidented’ to ‘covfefe’ to ‘hatorade.’ But he has made language his strength, seemingly surfing over linguistic barriers while Biden stops to inspect his own errors, creating a style that is choppy and sometimes unconvincing. Still, the “most famously unscripted man in politics” has finally talked his way into the White House.

The words you use are just a small part of your rhetorical style. As Napoleon’s chief diplomat once said, “speech was given to man to conceal his thoughts.” The more precisely you understand the words you hear, the more tightly you own your vocabulary, the closer control you will have over your circumstances – whether that’s the realm of politics, business, or just figuring out the world around you.

We started by making a list of 50 of the most well-known CEOs and business leaders (plus Donald Trump and Joe Biden) and collecting multiple transcripts of their speeches. We then took a 10,000-word sample for each leader from this catalogue and counted the number of unique words in the sample.

Lastly, we used the the NRC Word-Emotion Association Lexicon to calculate the percentage of the words used by each leader that are positive, negative, and ones that are associated with one of eight emotions (anger, anticipation, disgust, fear, joy, sadness, surprise, trust).

For the full research, including data and sources, visit bit.ly/LeadersVocabularies